Can You Eat Mudfish? How to Catch Them?

Do you know how kids make pies out of the mud?

They look nice, but it’s not a good idea to eat them.

But how about mudfish, are they okay to eat? Or are they about as edible as poisonous mushrooms? Believe it or not, mudfish are perfectly edible.

But that’s not all. You’ll also see what kind of creature the mudfish is. You’ll learn how it got its name and its many quirks. What season is best to angle for mudfish? What bait does it bite? Find out more!

Most anglers may find mudfish, (aka bowfin) unsavory. This is probably because of their peculiar taste. Not to forget how incredibly bony they are.

Although mudfish are exceptionally bony, they aren’t totally inedible. However, they have a peculiar muddy taste when not well prepared. This is because of their unique waste handling system.

Mudfish has a unique way of handling waste. They convert nitrogenous wastes to urea before excretion. Urea in the blood and muscles gives the characteristic taste.

How to Clean and Cook Your Mudfish

The next step after catching your mudfish is preparing it. This is really important. Not doing it right could render your catch inedible.

Some important steps to take are:

Once your mudfish is soaked enough, it’s time to-

After this, your mudfish is ready for anything. You could have it fried, pickled, or in mudfish stew.

Be careful not to leave your mudfish in saltwater too long. The flesh appears tender when raw. You don’t want to soften it further. However, once it’s fried, it’s nice and tasty.

Okay, now you’ve seen all that, go enjoy your catch.

Mudfish has been known to have high mercury content. For this reason, it’s not advised to have more than two helpings a month.

Now you know mudfish are edible. But does that tell more about this unique species? What exactly is a mudfish?

The mudfish is known by different names. From dogfish to cypress trout, the Amia calva, aka mudfish, is one of the sole survivors of an ancient group of fishes.

Mudfish are freshwater bony fish, of the order Amiiformes. They belong to a group known as primitive fishes. This is because the mudfish, along with sturgeon, still maintain some characteristics of their ancestors.

As demersal piscivores, mudfish live at the bottom of the water bodies and eat other fish. They are found in lowland rivers and swamps. As predatory fish, they prey on mollusks and aquatic insects. 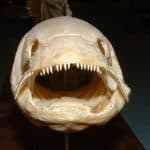 Mudfish may reach record-breaking lengths of about 43 inches.  On average, mudfish grow to about 20 inches in length. However, female mudfish tend to outgrow males.

The back ranges from olive to brown, with an often camouflaged pattern. Young males have an eyespot on the tail base. This appears as a dark spot ringed with yellow. The make-believe eyespot serves to confuse predators.

Mudfish have characteristic long, sharp teeth. This has earned them the title of “America’s Toughest Sportfish”. They have been known to latch on to the bait, so much that anglers mistake them for large bass. Also, getting a mudfish off the hook can be tricky business. You could get injured by its sharp teeth if not careful.

Mudfish can swim backward. This special adaptation enables it to beat a quick retreat. Thanks to their long dorsal fins. By whipping these back and forth, they can move either forwards or backward.

Also, mudfish are bimodal breathers. This means they can breathe in both water and air. Gills enable them to exchange gases in water. In addition, they have a gas bladder which helps them breathe air. Other primitive characters mudfish possess are:

Mudfish have been considered trash fish for years. For one, they aren’t a favorite with anglers. Because they feed on other fish, they were hated for depleting ‘good game’. In times past, they were thrown upon the banks to die.

However, a lot has changed since the late 1900s. Mudfish caviar has been discovered to be a delicacy. Not only that, they’ve become sought as sport fish. This is a great improvement for the underdogs.

Where to Find Them

Mudfish are native to North America. Ranging from St Lawrence River to Florida, they are mostly seen in the eastern half of the US. This includes the drainage basins of the Mississippi River and several rivers in the Gulf of Mexico.

Being a lowland fish, you would probably not find it around the Ozark Mountains. You would mostly find mudfish in waters with dense vegetations. They can also be seen in swamps and muddy waters. However, mudfish are tough fighters. They can survive anywhere from frigid waters to steamy swamps.

You could fish for mudfish all year round. However, a favorite season is the pre-spawn, late in February.

With the increasing temperatures, mudfish gather, preparing to spawn. This would be a great time to land lots of them.

Ice fishing for mudfish can yield a good catch as well.

How to Catch Mudfish 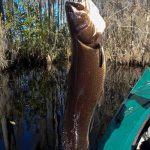 Angling for mudfish is quite the big deal. Lots of anglers have lost prized lures to these creatures.

As with angling for other fish, there is a technique. Following the right technique will yield better results. And fewer lures damaged or lost.

Luckily, mudfish are not picky eaters. This means they aren’t so particular about what bait you use. However, they appear to prefer natural bait, live or dead. Here are some irresistible baits you could try: crayfish, shrimp, and nightcrawler. That said, any type of small fish should do the trick.

If you’d much rather use lures, try spinners. Be careful not to use wooden or plastic ones though. Mudfish’s powerful teeth could easily ruin them. Metallic artificial are preferable.

You don’t need a special tackle for mudfish. Your bass angling tackle should do the job. Light or medium-light rods are a good bet. The length of your ideal rod would be about 6’-9’.

Your rod should go with a matching reel. Depending on your selection, this would be light or medium light.

Be sure to get a braided line. This is a good idea for fishing in snaggy waters.

Considering the mudfish’s strong jaws, use big, thick hooks. That way, there’s little chance of its straightening the hook. Also, your hook has a better chance of penetrating the jaw. This comes in handy when your catch begins to fight. They aren’t called America’s Toughest Sportfish for anything.

When you’re ready with your gear, get ready. One great thing about angling for mudfish is the fight. A mudfish will not go down without one. If you’re into game angling, you’d find the mudfish interesting.

Q: How do you tell a mudfish from a snakehead?

A: Snakeheads may sometimes be confused for mudfish. However, some subtle differences may be noticed on inspection. Be sure to look out for:

The snakeheads are prohibited species in some states. Be sure to report sightings to the state’s Wildlife Department.

Q:  How long can mudfish survive out of water?

A: Mudfish, unlike most other species, have the unique ability to breathe outside water. This is because they have a swim bladder. Their swim bladder acts as lungs, enabling them to breathe air.

On average, the mudfish can survive a day outside water.

How to Choose a Fish Finder? An In-depth Guide

Do Catfish Bite In The Rain?