The PiranhaMax 197C Color Fish Finder is a budget fish finder that still comes in with great technology. It makes a great addition to small freshwater boats, and the price simply can’t be beaten. It isn’t the strongest or most feature filled unit in Humminbird’s line-up by a long shot, but if you’re looking for the quality of the brand without having to dig too deep into your pocket book you’ll want to take a closer look. 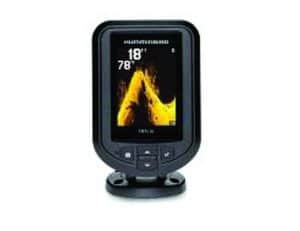 The display on this smaller unit comes in at about 3.5” and only has a resolution of 320×240. It isn’t the sharpest finder on the market, and the screen is pretty small, unfortunately. That said it still comes in with a 256 color display and an LED backlight so you’ll be able to read it in almost any situation.

The PiranhaMax 197C isn’t a slouch in the sonar department, although it’s not exactly going to have you mapping the ocean floor. It comes in with a modest 1600W peak-to-peak power which will allow you to read down to about 600ft which is suitable for almost any freshwater application you might think of however.

The transducer uses a dual-frequency beam like most modern finders, coming in at 200/455 kHz and allowing for remarkably sharp readings. The cone of the lower frequency band reaches out to about 28° which gives you a decently sized view of what’s underneath the water’s surface.

It also doesn’t feature any specialized readings, unfortunately. The system does make for a solid fish finding experience however and will do a pretty good job for a lot of purposes.

This unit is pretty no-frills, there’s no GPS or modular software here. It doesn’t even read the speed of your vessel, unfortunately. That said, it’ll still read temperature, and comes with fish alarm capabilities, though, so it isn’t entirely primitive.

Thanks to the simplicity of the model overall, the PiranhaMax 197c is astonishingly easy to use. There’s not a lot of options or extra stuff to deal with, which simplifies the menu system.

You’ll also find that the system itself is easy to use, and extremely intuitive making for an option that’s safe for pretty much anyone even if it’s their first experience in using a fish finder.

The overall on this finder looks a little bleak as far as technology and additional features go. Our review thus far has barely touched on what might be the most important factor for many anglers, which is cost. For the price, the PiranhaMax 197c is one of the best options currently available in the marketplace. If you’re running a light freshwater vessel and don’t want to run up too high of a bill, this unit makes a perfect addition. If price isn’t a factor, or you’re dead set on marine fishing, you’ll want to look elsewhere.