The Lowrance Elite-4 HDI is another fantastic offering within the Lowrance line-up. It’s one of the smallest in the series, but still boasts all of the impressive technology which makes the Elite HDI fish finders some of the best at their price point. The HDI feature is something which is rapidly becoming almost essential since the hybrid view allows you to see things you simply won’t pick up with standard sonar or DownScan imaging. 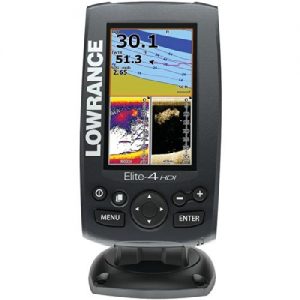 The Elite 4 HDI comes with a four inch screen that has 16-bit color. It’s not the biggest screen in the world, or the most colorful, but it’s a solid choice that will be easily readable in most situations thanks to the backlight and the 480 x 272 pixel resolution.

The Lowrance Elite 4 HDI reads down to about 750ft. With the addition of an optional Broadband Sounder, however, you can more than triple this distance and be able to read down to an impressive 3000’. Either way, this is a perfect sonar unit for the angler with a small boat.

It also has hybrid dual imaging capabilities. This type of scanning will overlay your typical DownView and standard sonar readings in order to produce an image which is more than the sum of its parts.

It comes with all the usual features that you’d expect to find in a fish finder, including the ability to read temperature and your vessel’s speed. On top of that it comes with Navionics Gold software and a powerful GPS so you’ll never have to worry about not being able to find your favorite spot again. It also features a waterproof micro-SD slot which will easily allow you to bring your waypoints with you when you’re done with the unit for the day.

Lowrance has a lot to be recommended in their software as well. Almost any angler will find plenty of use out of the Advanced Signal Processing, which will adjust your settings on the fly and save you time. You’ll also be glad to know that it features TrackBack technology which will allow you to go back to previous scans so you don’t have to worry about missing a detail.

The Elite 4 HDI is an easy to use device. The menu system is simple and easily navigated using the buttons on the side of the display. Like most of Lowrance’s systems though, it may take a little bit to get used to it and an amateur with no regard for what he presses might muck things up a bit.

For the angler with a smaller vessel, this might be exactly the fish finder you’ve always wanted. It comes in at a fantastic price for its advanced functions, and you’ll be amazed at clarity of the screen. You won’t have to mess with the settings much, and this unit is good to go right out of the box once you become acquainted with its easy interface. It comes with a one year warranty as well, on the off-chance, there’s some manufacturing error present in the device. For the recreational fisherman with a small boat, the Elite 4 HDI Fishfinder might just be too good of a bargain to pass up.

I am Steven, an experienced fisherman, and outdoor enthusiast. My life-long passion for fishing began when my father taught me how to fish at the age of ten. I started luremefish.com to share my extensive knowledge of all things fishing.