The Humminbird 561 Black and White Sonar Fishfinder is a quick and easy, no frills attached unit that makes for a great budget choice although those looking for advanced capabilities and extreme depth readings will probably want to give this one a pass. 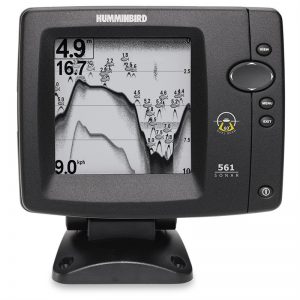 It comes in with a 5” diagonal display, which makes it pretty sizable for the price, although it is entirely in greyscale. The display screen’s resolution is a respectable 320×320 though, which will allow for pretty sharp readings despite the lack of coloration. It’s not huge, and it’s not colorful, but it is a solid piece that will be easy to read.

The Humminbird 561 has dual beam coverage at 83/200 kHz, making it fairly standard as far as finders in its price range go. It also comes with a respectable 300W RMS of power which can get you down to about 800 feet, making it ideal for lakes or near shore applications. Those who want to get into open water probably won’t find much use with this particular unit, however.

The finder has all the usual capabilities of Humminbird’s software, including the ability to recognize if a particular arc is a fish. It also has a dual screen zoom, which will allow you to get a good bit of information on the screen at one time in spite of the lacking parts of the screen.

It’s not the greatest finder in the world, but it is a solid and functioning one. For those who only manage to get out on a few weekends a year, it can make for a pragmatic and affordable addition to the boat of their choice.

This one is pretty much featureless, apart from the usual suspects. It does come supply temperature readings from the transducer and can measure your speed, but if you’re expecting GPS or a wide range of modularity this isn’t the unit for you.

One nice thing about the lack of additional features in this budget unit is the fact that it makes the menus stupendously easy to navigate. The buttons are right on the side of the unit and there’s really not all that much you’ll need to mess with.

Casual users will be glad to know that the Humminbird 561 is as close to plug-and-play as you’re likely to be able to find in any kind of fish finding device.

If you’re looking for something for weekend trips that won’t cost you much, this may be the perfect device for you. Those who are more serious about their angling adventures will probably want to look elsewhere however, as there’s a drastic lack of features which are pretty much standard with newer finders that are overlooked here.

It’s not that it’s a bad fish finder overall, the problems simply arise from the fact that it’s an older device. If they find that it fits their needs however, the thrifty fisherman will be able to walk away grinning at the price.