*This post contains affiliate links, and we will be compensated if you buy after clicking on our links.

To those who are experienced at the ancient art of fly fishing, it may be somewhat difficult to understand that fly rods are all very purpose-specific. Therefore, when choosing a fly rod for any given purpose, it is imperative that you choose the right one. However, to a novice fly fisherman, the many different aspects of choosing the right fly rod can be confusing at best and mind-boggling at worst.

For instance, an appropriate fly rod for any given purpose is chosen first by length, then by line weight and then, by action. Consequently, fly rods range from as short as 5 feet to as long as 15 feet and are designed to cast fly lines ranging from 1 weight to 14 weight. In addition, they are commonly designed to have one of three different types of actions ranging from slow to medium, to fast actions. So, how does a fly fisherman choose the right rod for his intended purpose?

Well, in order to answer that question, a fly fisherman must first answer several other questions by determining what type of environment they will be fishing and as well as the size of the fish species that they intend to pursue. For instance, fly fishermen commonly first divide aquatic environments into freshwater and saltwater environments. Then, both of those environments are further divided into several sub-environments.

Therefore, the reason that these distinctions are important to consider when choosing a fly rod is because the combination of length, line weight, and action determine both the range over which a fly fisherman is able to cast as well as the size of the fish that the rod is able to handle. Thus, fly rods can be equated to golf clubs in that each combination of length, line weight and, action is akin to a different type of golf club. So, while a golfer could conceivably play eighteen holes of golf with nothing but a putter or a driver, it would not likely be much fun to do so and, the same can be said of fly rods.

For instance, fly fishermen who pursue small trout on the small, mountain, streams commonly cast very small flies over very short ranges and need a very delicate presentation. On the other hand, fly fishermen who fish on large streams or rivers commonly cast much larger flies over much longer ranges and battle much larger fish. Therefore, an appropriate fly rod for any given purpose is chosen according to its length, its line weight and, its action.

Consequently, many experienced fly fishermen who pursue more than one fish species on multiple sized streams and/or types of water often have large collections of fly rods from which they can choose the appropriate rod for the intended purpose just like a golfer chooses an appropriate golf club for the shot that he intends to make.

So, because fly rods are first chosen according to their length, let’s examine that aspect first. As mentioned previously, fly rods range from as short as 5 feet to as long as 15 feet and, the reason that they do so is because the length of a fly rod works in conjunction with its action to determine the range over which it can cast a fly line. Thus, as a general rule, short fly rods are best suited for casting over short ranges while long fly rods are best suited for casting over long ranges.

On the other hand, fly fishermen who fish ponds, lakes, and the various saltwater environments almost always choose fly rods that measure 9 feet in length with the only common exception being fly fishermen who fish offshore waters for pelagic fish species. Thus, they commonly choose 8-foot rods in order to decrease the length of their moment arm and thus, increase the amount of leverage that they can apply to fight large fish species.

Now, the second aspect of choosing an appropriate fly rod for any given purpose is to choose one designed to cast an appropriate fly line weight. But, in order to understand this concept, you first need to be aware that casting an artificial fly is very different from casting a conventional fishing lure because, due to the materials used to construct them, artificial flies have very little weight and a lot of wind resistance. Therefore, rather than depending on the weight of the lure to bend the rod during casting (aka “loading the rod”) as a conventional fisherman does, a fly fisherman instead has to use a weighted fly line to cast his fly.

Then, there is another concept that is important to be aware of which is “delicacy of presentation”. For instance, when a weighted fly line lands on the surface of the water, its weight causes it to create a certain amount of disturbance and, this disturbance can be very disconcerting to wary fish that inhabit crystal clear water. On the other hand, fish that inhabit turbulent or turbid water are often far less wary and thus, a less delicate presentation is required when casting flies to these fish.

So, as mentioned previously, fly lines range from 1 weight to 14 weight with one being the lightest and fourteen being the heaviest. Thus, in order to design a fly line with a specific weight, fly line manufactures measure the first thirty feet of the fly line and then weigh that section of the fly line in grains (440 grains = one ounce). 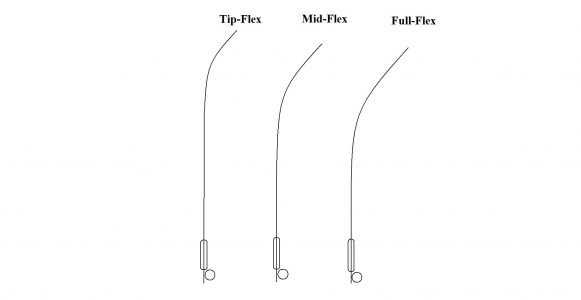 Now, the reason that this concept is important to choose an appropriate fly rod for a given purpose is that a fly rod’s action works in conjunction with its length to determine the range over which it is able to cast a fly line. But, while this concept is relatively simple when applied to fly rod length, it is somewhat more complicated when applied to a fly rod’s action.

Of course, this raises the question of what is the difference between loading and casting and, the answer to that question is that loading implies storing energy in the rod while casting implies releasing the energy stored in the loaded rod.

As mentioned previously, fly fishermen commonly divide the environments that they fish into two different categories consisting of freshwater and saltwater. Therefore, they also commonly divide fly rods into these two categories as well.

But, even experienced fly fishermen have difficulty comprehending how freshwater and saltwater fly line weights equate and thus, the chart displayed below provides that information:

But, you should also be aware that there is simply no such thing as an “all around” fly rod and thus, if you plan on fishing in more than one environment or, more than one stream size, then you should also plan on purchasing more than one fly rod. Even then, when fishing on streams, regardless of which fly rod you choose, you will inevitably encounter one or more situations where you really wish that you had either a shorter or longer fly rod or, a lighter or heavier fly rod or, a slower or faster fly rod. Thus, experienced fly fishermen sometimes joke that they need a rod caddy just like a golfer so that they can turn to their caddy and say, “seven foot, four weight please” or, “nine foot, five weight please”.