This really isn’t the absolute best unit that Garmin puts out, but what it lacks in additional features and attractive display it makes up for in simplicity of design. It’s a solid choice for the fisherman on a budget, but professionals and those who need the absolute best out of their equipment will want to consider other options. 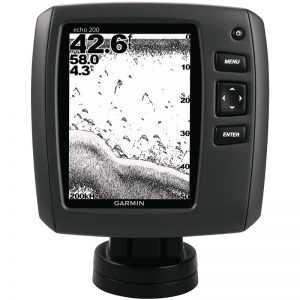 Despite the black and white screen on this unit, the screen has some nice things to be said about it. It comes in a respectable 5” package, and has a decent resolution of 320×480 pixels. It’s not all that much different from more modern units except that it’s in greyscale instead of color.

If you’re comfortable with the less than flashy display, the technical specifications of the screen actually come out pretty good.

The Garmin Echo 200 supplies a good amount of power to the 77/200 kHz transducer it comes with. You’ll be able to see down to about 1500’ in freshwater, which makes it a respectable choice for lake fishing. Even better, it’s still perfectly adequate for nearshore marine applications.

It lacks any extra viewing options like DownVu however, but it’s still quite capable if you’re able to use normal readings proficiently. It does have Garmin’s Smooth Scaling software, so you’ll be able to keep track of things even while you’re in motion. It’s a nice touch for such a cheap unit.

It’s not the most powerful fish finder you’ll be able to find, but it comes in a lot better than most of the competition within the same price range.

There’s not a whole lot here in addition to the sonar. It will read temperature and speed, but you’re not going to be making maps with this one. It does make this unit pretty much idiot proof, though.

The lack of GPS takes away a lot of the possible marine uses for this fish finder. You’ll need to stay near areas you know quite well in order to avoid getting lost, so keep that in mind.

The Garmin Echo 200 was obviously designed to be super easy to use. You’ll find that the menus are amazingly intuitive as soon as you power it on, and honestly, that was pretty simple on Garmin’s part since it’s just a regular fish finder. It’s also quite compact for a fishfinder with a 5” screen, making it good for use on smaller vessels.

Adding to the pragmatic design, however, is the ease with which you’ll be able to install this unit. Unboxing it, reading the instructions, and mounting it on your boat will be quick and painless, taking minutes rather than hours.

If you can stomach the black and white display, you’ll find that the Garmin Echo 200 is one of the best finders available within its price range. The display resolution is kind of surprising for what seems like a primitive unit and the whole thing comes in a simple and easy to use package which is sure to make even a complete novice happy. Experienced users will want to find a better option, but if you’re looking for a finder that almost anyone can afford and use, you could do a lot worse than to take a closer look at the Echo 200.