Catfish are a favored target of anglers the world over. Pretty much every variety is sought after to some extent, from channel cats to monsters like the Wels. They offer some of the fiercest fights that you’ll be able to find in freshwater, and the variety of methods and even fishing subcultures that arise from the pursuit of these unique animals is astounding.

When you’re looking for a catfish rod, the first thing to keep in mind is the material. Catfish fight hard, and you want something that’ll be able to stand up to the extended battles you’re facing. This is, actually, one of the few areas where graphite isn’t something that you want as your first choice, instead, the best poles are made of something stronger. The sensitivity isn’t quite as high of a factor here as when you’re angling for twitchier species like bass or trout.

The length is also an important consideration if you’re truly looking to get into the world. Poles of no less than seven feet are strongly recommended, as they’ll give you a lot more control when you’re working on landing your fish. Don’t think that you need something extensive in length, though, this isn’t surf fishing, something that’s eight feet or so is great for bagging catfish from the shore.

If you don’t already have your heart set on a spinning reel, go for a casting rod. The techniques used in catfishing lend themselves better to bait casters than spinning reels. Besides, if you hook a monster you’ll be appreciative of the extra power provided with a casting reel.

We’re going to recommend three options that should suit the needs of anyone who wants to get into catfishing, and we’ll discuss some of the qualities which make these rods highly suited for this specialized form of fishing. Read on, the information is yours and the ability to get into the sport is only inches away. 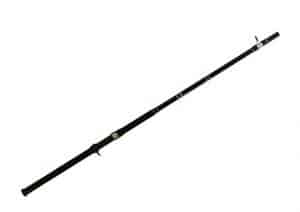 This rod is pretty much perfect for the beginners. The extra durability of the high-quality fiberglass makes up for the lack of sensitivity. It’s especially useful if you’re looking to fish from the shore, the additional length will allow you to make far and accurate casts.

The reel seat is made of graphite, which reduces the weight a little bit. This is definitely a heavier rod than most are used to, and it might be better for techniques that don’t require you to extensively handle the rod.

The line guides have ceramic inserts, increasing their durability. There’s also a glow in the dark tip on this one, so you’ll be able to see it move on those late night and early morning trips where the sun isn’t shining.

The grips are made of nylon, so you won’t be slipping off anytime soon. This can be quite essential in the field as you never know what may happen.

This rod is made for catfishing from the ground up and has all the necessary features. It’s tough as nails, eight feet long, and is made for a standard casting reel. There’s not much more you could ask for if you’re starting to get into the sport and the price makes it an absolute bargain. 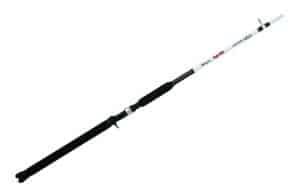 Shakespeare’s Ugly Stik rods are legendary amongst freshwater fishermen and these ones are designed specifically for catfish. There’s not much more you could ask for here, it’s simply an amazing series of rods.

These come in both a seven foot and an eight-foot version. That extra foot may not seem like much, but it can make a big difference. The fisherman who wants to stay on the banks will want the eight footer. The fisherman with a boat might find that the seven-foot rod is easier to maneuver in the boat. Make no mistake, the seven-foot option is still a powerhouse for this type of fishing.

The foam handles ensure that your hands will be comfortable all day long as well. The rod itself is made using the Howald Process. This process is what gives Ugly Stiks their name, but what it does result in is a tough, if somewhat primitive, blank that can take almost anything.

If you’re already familiar with Shakespeare’s rods, chances are you had an Ugly Stik or two. They’re the iconic rod for a beginner, and if you want to start catfishing there’s no better way to start than with a cheap and durable rod that’s designed specifically for your purposes. 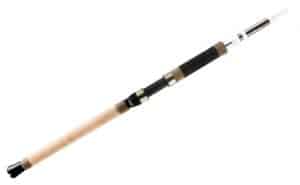 If you’re absolutely set on using a spinning reel for catfish despite the drawbacks this is the pole you’ll want. Okuma produces some amazing products, and this is a worthy addition to their great product line.

This pole comes in variations up to ten feet long. The ten-foot-long pole is probably a bit much if you’re going to be fishing from a boat, but it’ll add a lot of extra length to the cast of the fisherman on the shore.

The rod blank is made of E-Glass, which is a sort of upgraded fiberglass. This material has a loyal following amongst those anglers who target catfish, they’re simply the toughest rods you’ll be able to find at the same price point. You can be sure of your ability to handle monsters with a Battle Cat in your hands.

It comes with comfortable cork grips as well, which is important as the materials used in the blank make it rather heavy. This one is definitely more suited for the passive types of fishing, simply due to the weight.

It’s a bit pricier, and a bit more specialized than most gear but it’s absolutely the best option you’ll find for the price if you’re already planning on using a spinning reel.

For the absolute beginner, the Ugly Stik is probably the place to start. There’s a reason that these poles have won over the hearts of so many anglers, and that reason is amazing value for the price point. If you just want something you can trust right out of the box, it’s sure to fulfill its function.

For someone looking for something a bit more advanced, the BnM Silver Cat is a great buy. It’s a bit more specialized than the Ugly Stik. It’s also surprisingly low priced.

If you’re absolutely dead-set on using a spinning reel for catfish, the Okuma Battle Cat series of rods is simply the best option on the marketplace. Match the size off to your preferred catfishing method and you’re sure not to be disappointed.

We hope that we’ve been able to help you find the perfect rod to get into the water with. Catfishing is rewarding and with some practice you’ll be dealing with some of the largest freshwater fish around like an old pro, there’s nothing quite like seeing a record-breaking catfish up close. Why not get started now? All you need to get started is a pole, a reel, and the love of a good fight.