When you’re in the market for a bass fishing boat that you can use inshore on saltwater, your research can become overwhelming. That’s why we did the research for you and found the 11 best boats for inshore and bass fishing. Each boat offers its own unique specialties and it’s up to you to decide which will work best for your bass fishing.

Typical bass fishing boats are smaller and cannot handle the high seas of salt water. There are some boats, though, that are small enough that number one, you can afford, and number two, are still equipped to take on the ocean if you are traveling long distances.

While inshore fishing is defined as fishing on water less than thirty meters deep, and could technically refer to most freshwater fishing, for the purposes of this article we’ll be looking at boats that can also handle the high seas. Inshore fishing is often on waters as much as nine miles off the coast and into the ocean, so for that kind of bass fishing, you’ll need a boat capable of keeping you and your crew safe.

This article will also focus more on center console boats, as they are the best equipped for fishing. Why is this? Because with the steering wheel and components in the middle of the boat, you can fish from 360 degrees around the boat.

You also want to make sure not to buy too big of a boat, as it will be difficult to get around inter-coastal waterways. About 25 feet is the maximum length you’ll want for your inshore bass fishing boat.

Bay boats are a newer entry into the world of fishing boats and provide a happy medium between flat bass fishing boats, and larger center console cruisers. Bay boats walk a tight rope of trying to balance a shallow draft (how far below the surface of the water the hull goes) while needing to provide enough of a V-shaped hull to handle offshore waters.

With that said, with each passing year, the lines between bay boats and flats have been blurred. In the same way, the differences between center console boats and bay boats are harder to distinguish.

On a typical flat bass boat, the hull is not capable of handling offshore waters. While we are focusing on inshore boats, in order to get to certain inshore fishing holes a boat sometimes must travel through thicker, offshore waters. What you are looking for in a boat to handle that type of water is a deeper V-shape in the hull.

Ultimately, the choice is yours to decide what kind of boat works best for your needs. If you never venture offshore, a bay boat will be perfect. But if you’d like the ability to handle bigger waves, you’ll want one of the larger center console boats.

We make sure to highlight the best of all worlds in this article, so without further ado, here are the 11 best boats for inshore and bass fishing.

We’ll start with one of the newest boats by Blue Wave which claims to be the world’s largest bay boat. Now, this boat won’t come cheap, but neither will the thrills. If you have about a hundred grand to spare, it’ll be worth every penny. But don’t take my word for it, check out the pros and cons:

If you’d prefer a smaller bay boat, 2400 may be just the ticket. The 2400 Pure Bay is a pure fishing boat, with fewer frills and more room to get lines in the water.

The bigger Grady-White 251 Coastal Explorer almost made this list, but it’s more of a pleasure-cruising family boat than a pure fishing boat. With added seating eating up what should have been fishing space, I can’t recommend the 251, especially at $30-40k more than the 191 CE.

The newer 191 is a slimmed-down version of the luxury 251 CE. It’s over 1000 pounds lighter, and more than five feet shorter at 19’4”. The 191 CE also comes packed with standard features that you end up having to pay thousands extra in up-charges on similar boats. These features include the aluminum leaning post, molded pedestal seats, a removable backrest, and a swing-up footrest.

Beyond comfort and convenience, the Grady-White designed hull is known for its standout performance. This includes a smooth ride and fuel efficiency.

The Boston Whaler 210 Montauk is the flagship of the Montauk family, and it’s the bee’s knees when it comes to hybrid center console bay boats. With a shallow draft of just 15 inches and a not-so-long length of 21’4” you can easily get in and out of small waterways.

The Mercury Four Stroke standard engine won’t blow you away at 150 HP, but if you want more power you can add a 200 HP V6 Mercury with hydraulic power steering and a fuel/water separator.

You’ll want to go with the Fishing Package which includes a 94-quart cooler seat, tackle drawers, and of course the must-have rod holders. You will also want to get the Deluxe Leaning Post option. This package adds a 30-gallon livewell, a must-have option, as well as raw-water washdown capability.

A raw-water washdown allows you to clean the deck with ease, or clean off your anchor before putting it back on board. This is an invaluable addition to keeping your boat in the best shape, which will lead to a better resale value if you want to upgrade in the future. It all adds up to rugged utility and convenience, allowing you to focus on the fishing.

One of the most popular center console boats on the market, the Cobia 201 CC’s popularity speaks for itself. The reason it became so popular is that it achieves its goal of imitating a larger fishing boat on a smaller scale.

Both Century and Cobia are owned by Yamaha, and it’s no surprise that both are top contenders for the best inshore bass fishing boats. The Century is built for fishing, and no fish is safe when you’re patrolling the water on the 2200CC.

At 22’ long, the Century is not too large to be bulky on smaller waters. Max horsepower is 250 HP, plenty enough to fire away to the next fishing hull at top speeds. The draft of 17” is a little higher than some of the competition, but still shallow enough to handle most inshore fishing.

The Bay Ranger is a legend in the fishing boat universe, and Ranger has looked at every last detail on 2510. At just under 25’ long, but with a Mercury 350, this boat can basically go anywhere. The styling of the hull impresses just as much as

The main livewell is huge, with two fill pumps that bring in freshwater, as well as a recirculation pump. There is an additional crustacean well on the stern port side. On the starboard side is additional dry storage, as well as tackle drawers. On the port side bulkhead is a raw-water hose.

While it can be hard to peel your eyes away from the 2510 Bay Ranger, that sticker price likely has you looking for a similar but lower-cost option. Enter the 2310 Bay Ranger which shares many of the same features as 2510.

If you can’t afford a $50k-$100k boat and let’s be real, most of us fall into that category, look at the Carolina Skiff. Yes, as a skiff, it’s not technically a bay boat or a center console. But you’ll not only pay less than half the price of these other boats, you’ll be getting a boat capable of going through the smallest waterways with drafts under 9” on most models.

The reason for the extremely low draft is the DLX models have a square hull, rather than a V-shaped hull. This means that you won’t be able to take the skiff offshore unless you’re feeling extra lucky (not recommended) but you pay for what you get. 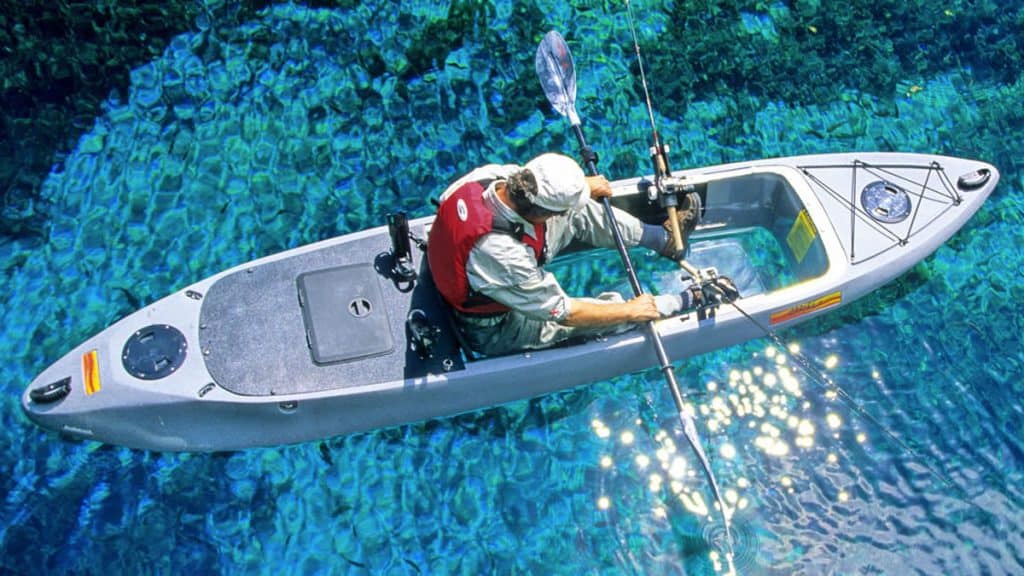